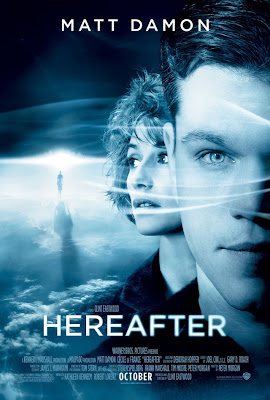 With the plethora of Hollywood product being aimed for twelve-year-old boys, it gets harder to become excited for any new mainstream release.  But I couldn't wait to see Hereafter.  The tantalizing subject matter, featuring three stories in which characters ponder the afterlife, makes for an endlessly fascinating discussion.  In addition to one's curiosity about our existences beyond the material world, one is also surprised to see a change of pace for director Clint Eastwood.  But the actor-director's oeuvre in the past decade has been nothing but surprising, creating a body of work with such a vitality that eclipses those of many filmmakers half his age.

The reaction to this film has been rather cold, perhaps because the trailer deceived people into thinking they were getting another Sixth Sense, but instead received another of Clint Eastwood's "chamber pieces".  Also, people have attacked this film for being rather superficial in terms of its approach to the subject matter.  But Hereafter isn't about providing answers about what exists further on, it's about how people cope with life-changing incidents.


Peter Morgan, the script-writer of The Queen and Last King of Scotland once again incorporates historic events into a narrative, as seen in the opening scene which recreates the 2004 Indian Ocean tsunami, devastating a resort at which journalist Marie Lelay (Cecile de France) is vacationing with her lover and producer Didier (Thierry Neuvic).  Much has been made of this sequence, in which CGI has (for once) been properly used so that one doesn't see the craft.  Even the film's detractors concede that this scene is spectacular, but in truth this sequence is presented as lean and matter-of-factly as any other dramatic moments that follow.  For instance, a later closeup of a bereaved sibling is far more devastating than anything that the Dream Factory conjures up in these first few moments.  As usual, Clint Eastwood is less interested in spectacle than the humans affected by it.  (I am reminded of his refusal to turn Flags of My Fathers into a war-is-hell epic that could have rivalled his producer's own Saving Private Ryan).  Instead, you see just enough of the chaos to push the narrative forward, as Marie nearly drowns in the deluge, and has a near-death experience.  After this trauma, the aggressive journalism celebrity (whose face also adorns billboard ads for Blackberry) instead becomes aloof and meditative. While taking time off from her television show to recuperate, she begins her long held ambition to write a tell-all book about politician Francois Mitterand, but instead (much to the chagrin of her publishers) decides to write about her brief encounter with the hereafter.

The second story, set in London, features 12-year old twin brothers Marcus and Jason, who live with their loving but drug-addicted mother.  (It is to Morgan's credit that this substance abuser is presented as a compassionate human being, instead of a physically or psychologically abusive lout.)  After Jason's death in an accident, social services move Marcus to a foster home.  However, he remains socially withdrawn and instead spends his time researching psychics in order to seek some solace over the loss of his brother.  Of the three stories, this one is perhaps the most satirical, despite that it it depicts a broken family unit and the unimaginable loss of losing a child.  In one sequence, Marcus sees an array of caricatured new age psychics in his quest for answers, each one more ridiculous than the last, thus informing the viewers that this film is less keen on providing answers about the almighty than studying the lengths to which its characters will go to explore these new senses brought upon by grief.

And while these central characters are trying to explore the other side, in the third story, George Lonegan (Matt Damon) conversely wants to put aside his former self as a celebrity psychic and live a simple life in LA.  However, he is constantly forced to demonstrate his psychic abilities on people who are seeking contact with those on the other side, often at the prodding of his own brother.  His sibling Billy (Jay Mohr) urges him to use the gift he is given, but George relents, instead calling his abilities a curse.  As George attempts to have a normal life, wearing a hardhat at his construction job and taking a cooking class, one is tempted to compare Damon's character to that of his boy genius character in Good Will Hunting, who likewise forsakes his gifts for a blue collar world. Despite that these moments have the most star power, perhaps some of these scenes are the weakest in the film, especially when George attempts to have a relationship with his cooking class partner Melissa (Bryce Dallas Howard).  The overlong sequence in which their tasting of food, while meant to be passionate and subtly erotic (as which both of these characters are escaping pasts and attempting to embrace the gift of life), instead becomes plainly silly, because Ms. Howard doesn't rise up to the fun and frolic that these moments require.  (One is reminded of the endless Lady Chablis sequence that train wrecks the otherwise very good Midnight in the Garden of Good and Evil.) Much better are the dramatic moments when Melissa discovers George's psychic abilities (indirectly due to his brother), and urges him to do a reading for her, which reveals more of her past than she would have imagined.  As the other characters in the narrative are seeking answers, this story thread reminds us that some questions are best left unanswered.

These three stories converge in a carefully plotted resolution that feels neither contrived nor satirical (for example in the cute ending of Kieslowski's Three Colors: Red, which joins the stories of the other two films in the "three colors" trilogy).  Eastwood has a good trump card with Peter Morgan, who cleverly weaves the threads together, unlike Paul Haggis' messy attempt at meta-narrative in Flags of Our Fathers.  (He further blurs fiction and reality with the addition of the 2005 London bombing, and actor Derek Jacobi playing himself.)

Hereafter isn't the masterpiece I had hoped for, as it admittedly has some choppy sequences, and some weak secondary characters.  If one is expecting a Hollywood extravaganza, one will end up being as disappointed as some of the characters looking for enlightenment.  Instead this is a low-key study, where the other world is presented only sparingly (with blurry silhouettes in the foreground, bleached out by the traditional white light), and the supernatural is presented as subtly as a hat blowing away.  Despite that Steven Spielberg is the executive producer, there is little wonderment to behold other than that of human emotion.  Once again, Eastwood presents a film with his typically lean direction, jet-black cinematography by Tom Stern, and a characteristically sparse musical score. (Upon leaving the theatre, I found myself humming the similar piano trickle from Million Dollar Baby.)  And perhaps in light of the bombast we customarily expect from Hollywood this days, this film is a quiet relief.

In the past decade, Clint Eastwood has consistently given us surprises: seldom delivering what we expect, but instead what we need.  Happily, Hereafter is another fine example of Eastwood's renaissance as a filmmaker.  His recent oeuvre can only be compared with the impressive string of films released by other directors like Robert Altman, Luis Bunuel or John Huston, who made career-defining comebacks in their post senior years.  While this film may sound elegiac, (as in Altman's A Prairie Home Companion, which the director likely knew would be his final picture) especially since it is made by a filmmaker in his autumnal period,  it is one of the most life-affirming movies ever made about death.  (One would put this film in that very small catalogue shared by Peter Weir's Fearless.)   It is a surprisingly rapturous study of people who learn to appreciate the great gift of life after their experiences with death.  And while still showing no signs of slowing down at the age of 80, we can only ask, what is Clint Eastwood going to do next?