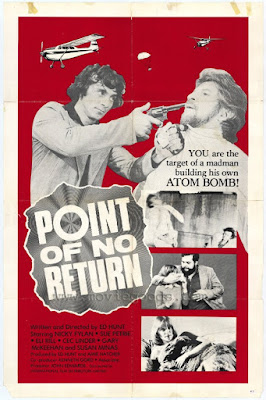 Most people's Holy Grail of Lost Films would include such famously elusive titles as Tod Browning's London After Midnight (1927), or F.W. Murnau's Four Devils (1928). Fair enough. High on my list too, is the 1976 Canadian thriller, Point of No Return, written and directed by the one and only Ed Hunt.
To viewers north of the US border, Edward Hunt will always be synonymous with for the 1977 Canadian camp classic Starship Invasions. Seriously, how can people not love this movie? Say what you will about its shortcomings in the production and effects department, the movie unquestionably has a lot of heart. And no wonder it has endeared genre fans of a certain age.  On that basis alone, the staff at ESR has always gone out of its way to screen anything else by the man. It is clear that Ed Hunt had something to say for himself; at the very least he sure knew how to set a mood.

His short but eccentric career includes such curios as the creepy paranormal doc UFOs Are Real, the biological thriller Plague, and the "children run amuck" horror favourite, Bloody Birthday. Although Ed Hunt was born in Los Angeles, much of his filmography was Canadian-made. After another beloved piece of Canuxploitation, The Brain, in 1988, Mr. Hunt disappeared from the silver screen, until his 2014 comeback with Halloween Hell.

Almost all of his feature films have been made available either on VHS or DVD. Except Point Of No Return. This title is included in the "Top Five Missing Films" at the Facebook group for Canadian Cult Films of the 1960s, 1970s and 1980s. (The other four titles will likely appear in this column at a later date.)
Here is Clive Denton's film review, from the February 1977 issue of Cinema Canada. (I apologize in advance for the length of his review, but feel it's necessary to leave some kind of Internet footprint about this film.)
Whatever limitations there may be to the impact of Point of No Return, one thing you can say for it right away: it isn't boring. In fact, though the story it tells is basically unlikely, it seems more plausible while it lasts than did a slightly similar recent Canadian shot at a thriller. Sudden Fury.
Ed Hunt has directed with some flair. The location shooting in and around Toronto (the ferries and the island, Buttonville airport) is effective and the film decidedly benefits from the presence of a young leading actor who has presence, Nicky Fylan. He possesses an aggressive charm and an ability to make even far-fetched situations convincing. With more controlling direction he might later on be, in his slightly John Garfield way, very good indeed.
The plot of Point of No Return concerns two brothers. They have some eccentric traits, such as a strong belief in flying saucers and a loyalty to the Toronto Sun. They are, otherwise, likely Canadian lads and the one brother (Fylan) is understandably peeved when the other is murdered, thrusting him (still Fylan) into what used to be called a "web of strange and baffling mystery". The film's makers also seem fairly sure that UFOs do exist and that they visit Ontario regularly, to the extent that this intriguing possibility is only a side issue of the story. What it really revolves around, not to give away too much, is the building of a "small but effective atom bomb," as the chief villain rather Goonishly describes his pet project.
One feels some goodwill towards this film, compared to altogether too many past Canadian features which have been more ambitious and serious but also more pretentious and dreary. Were the producers wise, however, (to be very realistic about marketing) to make their content fairly decently "Adult Entertainment" rather than blatantly "Restricted"? This inhibits fashionable swearing - the worst words having to be bypassed - and cuts off lovemaking at a discreet fadeout. (In compensation, the hero's covered crotch is often literally in focus). The film would pass the fairly tough scrutiny of audiences at theatres like (in Toronto) the Yonge or Odeon Coronet. But "Adult Entertainment" movies can only fill the lower half of an exploitation double bill.
As often happens, there seem to lurk ideas behind the commercial facade of Point of No Return. Its hero has been to jail, he has extreme violence pent up within him and yet he is vaguely trying to a reasonable life, if left to it in peace. Such issues could be made a little clearer, dwelt on more maturely and interestingly than they are. It’s possible within a thriller movie framework. Remember The Big Heat, Cry Of The City, even On The Waterfront. (Sorry, there are no Canadian counterparts in existence yet.) Point Of No Return suffers from either too much characterization (on one, purely saleable, level) or not enough (on a higher, more promising plane). To this higher plane, Ed Hunt - to his credit - surely aspires.
---
This film, which co-stars familiar Canadian actors Eli Rill, Cec Linder and Susan Petrie, played briefly during the fall of 1976, in the Toronto area at least, on the bottle of a drive-in double bill with Paul Bartel's Cannonball! Allegedly, the film elements are now past the point of no return: residing as landfill in the Leslie Street Spit. But, according to our research, the movie did play on City TV as late as 1984. Who is to say that an early VCR owner didn't record it for posterity?
Film titles once thought lost still get unearthed, so one is hopeful that Point Of No Return will be found again some day. At this remove, we'd be happy even with a chromium dioxide, EP-mode copy. Check your attics! 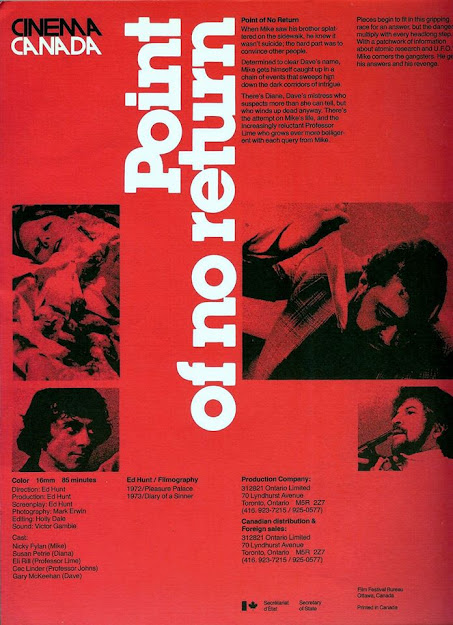