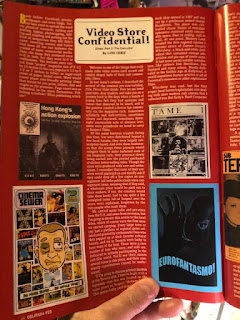 Yours truly rates a mention in the latest issue of Delirium magazine. In his Video Store Confidential! column, Suspect Video's Luis Ceriz continues his overview of zine history with Part 2: The Canucks! His article includes such vintage titles from the 1980s-90s film zine boom as Trash Compactor, Sub-Terrenea, Tame, etc. Even recent pubs like The Laser Blast Film Society rate a mention, in reference to the "zine" renaissance of late.

Alas, ESR doesn't get a mention, but the first (and so far, only) issue of my other zine Eurofantasmo! is featured in the article. Eurofantasmo! was published in Dec. 2017 in concordance with my birthday. One Sunday afternoon I celebrated the big day with two things I hadn't had in a long time: a screening and a zine launch! Eurofantasmo! was an attempt to get back into the self-publishing world, with a zine that examined the bottomless catalogue of European genre films. The intent was for each issue to explore one theme. Issue #1 offered up a brief history of Superhero-Supervillain cinema, inspired by Italian comic strips, followed by reviews of some key films. (The second issue is still in preparation: it was put on hiatus due to family emergencies and then, pandemic.)

Since that birthday screening-zine launch party, I've given out issues of Eurofantasmo! #1 to people as I've seen them. Therefore, I'm delighted and think it's quite hilarious to see that this one-off, with no fanfare, distribution or even any reviews, has been included in a history of the film zine format.

On the other hand, after 25 issues and 12 years, ESR continues to be excluded from zine history, and I can only blame myself and bad timing for that. The first issue of ESR was published in 2001, several years after the big "film zine boom" petered out, and a few years before the zine scene in general kind of wound down. I admittedly didn't promote it through any more channels than self-distribution, and appearances at trade shows around town. It felt like there was just enough time to research, write, publish and move on to the next issue. I should have had a point of purchase, i.e. putting them up for consignment at stores like Suspect, so that they got seen. Plus, I've always regretted not breaking into the US market. This folly has of course affected its exclusion from history.

Events in recent months have forced me to ponder what there is ahead, and what I've left behind. Alas, I wish to leave this post with a positive note. The new website is forthcoming, as is its return to print. From here, it can only go upwards.

There is a saying that when you complete a work, it's no longer "yours", as it leaves into the hands of others. From there, you just never know where your creation ends up. If it makes a difference to anyone, and enriches their lives even briefly, then it's worth it. I'm glad that Eurofantasmo! has done that. Thanks Luis, for the plug.

Look for Delirium wherever magazines are sold. 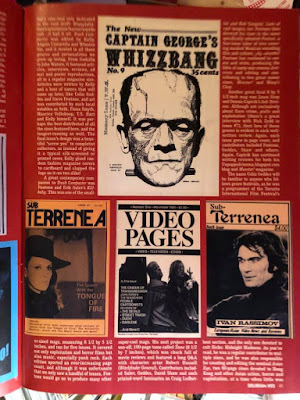 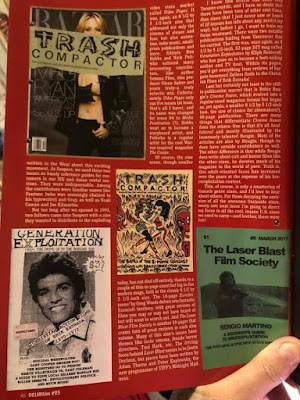