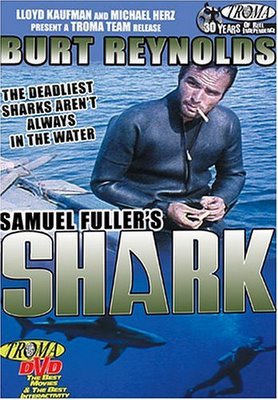 That lovable, cigar-munching mad genius Sam Fuller was so incensed that the Mexican producers butchered his cut of this movie (filmed under the title CAINE), he ordered his name removed from the credits. Eventually, the movie came out as SHARK!, possibly sank like a stone, but has been a perennial title for years on cheapo public domain video labels. In fact, when Cinematheque ran the Sam Fuller retrospective in 1998, this was the only title not programmed, perhaps out of respect for the director's disdain for this project.

Well, whatever Fuller's intentions were for this film originally, still, you know, I kinda like it. It's no masterpiece, but it isn't a bad little adventure full of the grit and sweat you would expect in anything by this madman. Burt Reynolds is actually rather good as an adventurer who is hired to get some gold buried on the gulf floor surrounded by maneating sharks. Featured in the cast are Barry Sullivan and Arthur Kennedy... but no-one has a character named Griff! Ah well... There's even a kid sidekick (perhaps an influence on confessed Fuller fan Steven Spielberg for INDIANA JONES AND THE TEMPLE OF DOOM), a climax that's almost as wild as that of DEAD PIGEON ON BEETHOVEN STREET (the key word is... almost).. and lots of not-bad underwater action.

It's no great shakes, but it's a pleasant reminder of the kind of undemanding stuff we would still devour like cotton candy at 3 AM watching "The Cat's Pajamas" on Buffalo's TV 2!
Posted by Greg Woods at 2/07/2006 05:50:00 AM No comments: