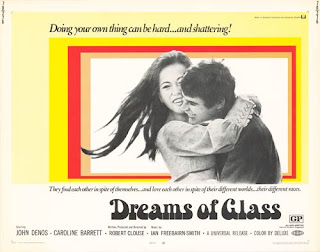 Although today director Robert Clouse is remembered for his action films, especially his martial arts-themed movies like the classic Enter The Dragon, his first feature (after making a couple of shorts) was the delicate drama Dreams of Glass, about an interracial romance between a young man (John Denos) and an Asian girl (Caroline Barrett).

Tom, an unpredictable 18-year-old high school drop-out, is in love with Ann, a 16-year-old Japanese-American girl; but Ann's conservative parents and Tom's father, a middle-aged San Pedro fisherman, both object to the relationship. Despite these objections, the couple are happy together. While walking in the local park, playing hide-and-seek and taking photographs of each other, the two are spotted by Ann's mother, who chastises Ann when she returns home. The following afternoon, Tom takes Ann to a deserted warehouse that belongs to his father, and they decide to make it their home.


I had actually seen this film on City TV late in 1986, which had aired during the wee hours in the final slot of their all mighty, all night, Late Great Movies. Circa 1986 to 1987, whenever City showed a feature film (especially from the 1970s) that was not listed in Leonard Maltin's video reference guide, its obscurity would therefore entice your humble daredevil reviewer to tune in. As a result, over those years I had seen Invasion From Inner Earth, The Lucifer Complex, Joey and Redhawk, Game For Vultures, Child's Play (the Lumet film, not the killer doll), Fyre, and several others. Some of these titles have since been listed in Maltin's book, but not all!

25 years on, all I remember about the movie was how the tasteful love scene featured a visual touch like being lensed through the threads of an afghan blanket; someone's TV set falling from one of the boats moored in the marina; and my surprise in seeing Danny DeVito in the final credits. I also remember that the film wasn't great; not terrible, just rather slight. Still, in those days, it was easy to dismiss a film like this because one could see so many more similar works that either depicted youth or a star-crossed romance. However, I've always been curious to see if time has been kinder to this movie. Dreams of Glass has never been available on VHS or DVD; it seems its fate was consigned to a sporadic showing on the late, late show. Alas, over the years, City merged with CTV, and Late Great Movies was a distant memory. Now instead of seeing elusive works of cinema, people get to watch "Bachelorette" reruns at 4:30 AM.

Upon seeing a lot of these films simply because they were not listed in Maltin's book, one would ponder if any or all of these are justifiably obscure. Well, I've always been a believer that time proves the worth of everything; also, it's the Henri Langlois in me that says all cinema should be available for all who wants it, now and for the future. It would be interesting to revisit an honest little picture like this once again. Seen today, it would likely be a refreshing counterpoint to the reality TV and "CSI" reruns that now take over the programming twenty-four seven. 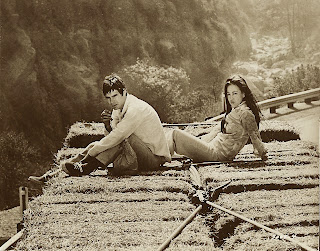 This film was just broadcast broadcast on CHCH TV Hamilton.
It was on from 2AM til 4AM. I caught the last 20 or so minutes.
Maybe they'll run it again sometime and it can be recorded/uploaded.