That Night At Cinema Subterrain 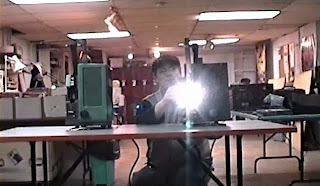 Last night, for the first time in years, I re-watched this little video I shot and edited depicting the Saturday night in November of 2005 when cinema showman supreme Dion Conflict presented his Hunkajunk Vol. 4 screening at Skot Deeming's Cinema Subterrain in London, Ontario. Skot, longtime friend and sometime ESR contributor, is a twenty-year veteran of the independent scene, who has dabbled in zines, moviemaking, film distribution, and VJ-ing. In 2003, he had moved from Toronto to take a job in his native London. Within a year, never one to rest on his laurels for long, Skot began the monthly Cinema Subterrain screenings in the city's L.A. Mood Underground, the basement of the L.A. Mood comic and game shop. (The space was also being used for role-playing games and poetry readings.)

Dion Conflict has programmed cult and ephemeral cinema prints from his own collection since the 1990s. In the early 2000s, he was doing bimonthly "Conflict Archive" screenings at the Royal Cinema on College St., and publishing a zine Konflikt in the Kino in concordance with those shows. During this time, he also revived the Hunkajunk series that he had done way back when at the Rivoli. True to the name, these programs were a potpourri of educational shorts, training films, movie trailers, TV commercials and what have you: all in all, entertaining decoupages of past pop culture artifacts. Skot happened to be in Toronto on the same weekend that Dion premiered Hunkajunk 4 at the Royal in December of 2004. We attended, and in our herbal euphoria giggled and heckled through the proceedings, providing Dion the audience participation that he wished for. At that screening, Skot had decided to bring Dion to London to present Hunkajunk at Cinema Subterrain. The two men finally met after several months of my trying to get them together in the same room (it was an ongoing joke how these two guys kept "just missing" one another at various events). A deal was made, and nearly one year after it had premiered (in the interim, showing in North Carolina and Finland), Hunkajunk unspooled in London, Ontario, one crisp autumn evening.

On this same weekend in 2005, I had finally fulfilled a promise to visit Skot in London and check out his screening series. Because I had spent half the previous night in the collision centre filling out accident reports (a truck had rear-ended my rental car within fifteen minutes of driving it off the lot), and because of a last-minute emergency at work which forced me to cut short my visit and return at the crack of dawn on Sunday morning, my nerves were so frazzled, that I couldn't then fully absorb this experience. Somehow, despite all this fuss, I had the last-minute foresight to bring a video camera to record the event, for which I later became very grateful. Upon reviewing the footage, I vicariously relived the moment, and appreciated its true worth.

Even though the camerawork wasn't all that great (not helped by my anxious mental state and the absence of any game plan), I felt there was enough there to cut together a little movie. The nine-minute film comprises of several sequences: Skot and his friend A.W. setting up the show; Dion doing his introduction; brief clips of what is being shown (with the necessary audience guffaws on the soundtrack); and a wrap-up of people just hanging out afterwards with Dion selling his wares. This whole project was just a toss-off that would only ever be seen by the people involved, but warts and all, I'm proud of the little thing. The grainy Hi-8 look and hand-held work indirectly added an authenticity to it.

After seeing it again for the first time in seven years, I realized that perhaps it is time to revisit the footage, clean up the audio, and put together an extended cut. The crux of the movie is obviously Skot and Dion, but there is much more going on under the surface of this little epic that could be fleshed out. After absorbing the central story and the technical stuff in the first view, I re-watched it several more times last night for the ambience, and to remind myself of what more I had shot that could be added in.

This movie has the potential to be more about than what the two guys are putting onscreen: it could include more footage discussing the L.A. Underground space and how it is used, the communal effort by many people who helped behind the scenes, and especially the interesting regulars who would come to support this venue. It preserves a little moment that most of the people involved have likely forgotten. It is a document about a space that every month or two became a little piece of culture where people could celebrate some unique programming and hang out with other individuals looking for something out of the mainstream. It is also about a piece of time that is truly dead: Skot and Dion have moved on to other things, and many of the people involved have parted ways. Cinema Subterrain would cease the following spring. (The Hunkajunk screening was the first night that Skot's shows went bimonthly, until he finished in May of 2006.) And sadly, it is also a representative look at many similar micro-cinemas that are fast disappearing in the onslaught of urban gentrification. 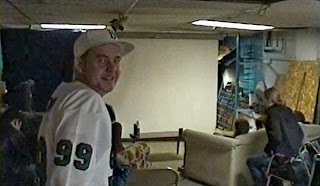 Over the winter, I'll be reviewing and recapturing this footage to work on this extended version, and attempt to realize what more this little movie has the potential to stand for.

Below is a sampling of shows that were put on by Cinema Subterrain. (If you have a micro-cinema like this in whatever city you're in, get out and support it, because you'll miss it when it's gone!)


These two images represent the "audience choice" screenings, where patrons voted beforehand which of the two programs they wished to see that night. Sadly, Cinema Subterrain ended before this show materialized, but Horror Mexicano was winning. 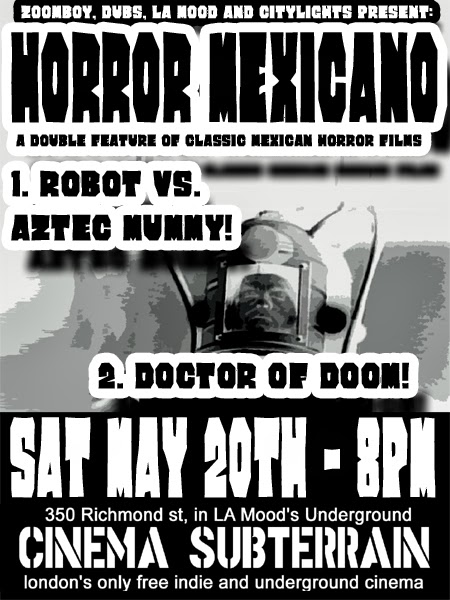 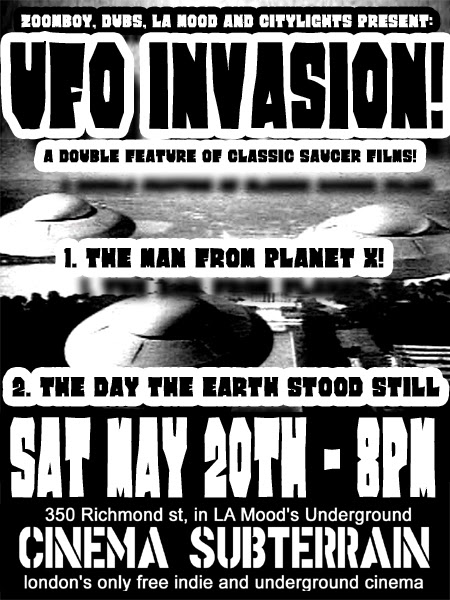