October the 10th would have been the 94th birthday of cult cinema’s patron saint, the redoubtable Edward D. Wood, Jr. His Grade Z genre films such as Plan 9 From Outer Space and Bride Of The Monster are remembered for their inane dialogue and cardboard production values, peopled with  Hollywood stars well past their glory days, such as Bela Lugosi whose twilight years were riddled with drug addiction, or Wood's own stock company of outsiders and hapless hopefuls. Wood's offscreen penchant for wearing women's clothing (angora was a favourite) was also the topic of his feature debut Glen Or Glenda, in which he also appeared onscreen in the title role(s).

In 1978, Wood passed away at the age of 54, penniless and forgotten, just a few years before his work was rediscovered by cult movie fans, under the banner of "so bad it's good". The cult of Wood grew formidably over the years, prompting the publication of Rudolph Grey's 1992 biography Nightmare Of Ecstasy, and the release of Tim Burton's giddy 1994 Hollywood biopic Ed Wood, featuring Johnny Depp as Wood, and Martin Landau in his Oscar-winning performance as Lugosi. The movie -which chronicles his heyday of his beloved classics, and ends before his decline into alcoholism and pornography- deserved to be a mega-hit, but it sadly under-performed at the box office in first-run. The film however had a strong shelf life on VHS and cable, where it no doubt found the majority of its fans. The renewed interest in Edward D. Wood also prompted the release of numerous documentaries about the man and his movies, and his filmography was reissued to unfamiliar viewers.

In those days, there still existed a reasonably sized window between a film’s theatrical run and its eventual home video release, so that it could still enjoy a healthy lifespan in repertory cinemas before going to tape. So once Ed Wood hit second-run, Toronto’s repertory circuit had a field day with it.

The film was often paired in a double bill, shared with one of Wood's key films (Plan 9 From Outer Space, Glen or Glenda). However, the apex of "Ed Wood Mania" was on a snowy Friday (the 13th, no less) in January of 1995, when The Bloor Cinema showed a "one night only" quadruple bill of Ed Wood movies that were not as regularly viewed: Jail Bait, Bride Of The Monster, Night Of The Ghouls, and The Sinister Urge.

In honour of Mr. Wood's birthday, and his often misunderstood legacy, today's column will share the experience of that night, which would be one of the greatest screenings I've attended in my entire life.

"Rocky Horror" notwithstanding, never a more eclectic crowd have I seen at the cinema than on this crazy, crazy night: pimply geeks with black rimmed glasses, hippie stoners, people in black trenchcoats (and matching lipstick)… even a dapperly dressed older gentleman I chatted with in the ticket line ("He SHOULD get a star in Hollywood! He had gumption!"). Some may ask, "How was this different from the clientele any other night at the Bloor back then?" Well all right, they were just in greater abundance. And how!

When Jail Bait began at 7 PM, there was still a lineup around the corner of patrons slowly being admitted to the theatre. If the two-floor cinema wasn't filled to capacity that night, it was damn close. Because the staff was still shambling to get bums into chairs, I too missed the opening of Ed Wood's eccentric film noir, but once I found a seat up close and centre, and heard the ubiquitous piano and flamenco guitar score coming from the speakers, I was in cult movie heaven.

In between flicks, you had just enough time to get some refreshments or go outside for a smoke (...of something). During one such break, I wandered to the lobby for my fifteenth coffee, and picked up a handbill from (the much-missed) Admit One Video, which advertised Ed Wood VHS tapes for sale. I can't remember now if they co-presented the night's festivities, but it would stand to reason, as it was doubtful that all (or any) of these movies were projected on film. One movie opened with the Admit One logo displaying before the credits.

Even if we were seeing video, it hardly mattered: it was a blast just to see this stuff on a big screen, and with a large audience (likely a bigger and more appreciative crowd than any of these films received in their initial releases). For instance, the second feature, Bride Of The Monster (the only one of this quartet I had seen previously) was definitely shown on video based on its soft appearance, but I don't think anybody cared. The place shook with applause when Bela Lugosi's name appeared in the credits- likewise for Tor Johnson's. The thunder continued in the next offering, Night Of The Ghouls, the long-lost sequel to Plan 9 and Bride Of The Monster! The projectionist briefly lost the sound during the film's opening with the famed Criswell, whose psychic abilities were equal parts clairvoyance and caca, but it mattered not, since the crowd was so boisterous, we wouldn't have heard his dialogue anyway. Similarly, the audience would shout their approval to the screen every time the floating trumpet appeared.

Although perhaps to some, this cinematic experience was being enhanced as evidenced by the, uh, "herbal fragrances" in the air, I didn't partake. I've never, ever, been able to view a film under the influence of alcohol or grass... I'd fall asleep first. My movie-watching drug of choice has always been copious amounts of caffeine. (Truthfully, with all the energy in the hall that night, we all could have grasped a natural high.) Still, after working all day in Thornhill and hightailing it down to the cinema right after, all the better to be wired on the bean, so I was still wide-eyed and giddy as the evening concluded with my favourite picture of the four, The Sinister Urge. Ed Wood's daft "cautionary fable" about the dangers of pornography is epitomized by the writer-director's stock company of hard-working cops in pursuit of some knife-wielding loony driven to attacking women in the park, all due to (gasp!) looking at women's bloomers in smut publications.

With the exception of Bride Of The Monster, the night's films were the least-seen of his "legit" oeuvre: best-known largely to veteran Ed Wood cultists. One could say that Wood's off-screen persona eclipsed many of the films shown that night. But life and art intersected in one pivotal moment of The Sinister Urge when the cops decide to have an undercover officer dress up as a woman to bait the killer. The audience went NUTS, anticipating the director's Hitchockian onscreen cameo. 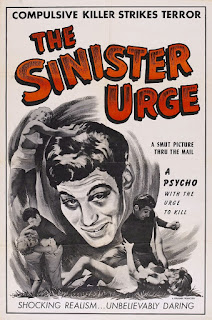 Thanks to the Medveds and their Golden Turkey Awards (which, granted, was a catalyst in resurrecting his movies), Edward D. Wood garnered the reputation as the worst director of all time, for all of these films that fall under the "so-bad-they're-good" realm. Personally, I've never been comfortable with the "so-bad-it's-good" maxim, as much as I understand its resonance to people. How can movies so entertaining, imaginative and sneakily subversive be "bad"? To be sure, some viewers came out to have some laughs at the technical ineptitude, way-out dialogue, and corny special effects. But I think too, a lot of the laughter came from the element of surprise and, yes, amazement.

Therein, I think, lies the enduring appeal of Ed Wood's cinema (and no, that phrase is not contradictory). Whatever his deficiencies, lacking the attributes of any conventional Hollywood director, his movies are always imaginative, innocently entertaining, and full of enthusiasm. He worked on the fringes of a movie industry that otherwise ignored him, and yet created a mini-Hollywood of his own. He made micro-budgeted valentines to the genres he loved, and (years before the Warhol Superstar ideology) made cult legends out of his eccentric stock company of actors. Despite how his movies appear on the surface, they remain products of a classic Hollywood outsider who succeeded in making a personal, identifiable body of work despite the odds, that people still talk about 60 years on.

Having said that though, if they decided to replicate this screening for today's audience, it just wouldn't be the same. Regardless of the things we loved to joke about Ed Wood's films, we also appreciated those movies. Today, I'd fear that the program would be sabotaged by the accompaniment of all the "ironic", condescending remarks emanated from these disruptive hipsters who pollute every goddamn cult movie revival screening nowadays with their ridiculous notion that they somehow have to exert their superiority to whatever spools onscreen. At least in my earshot, there was none of that bullshit: everybody was just having a great time.

I attended this screening alone, because none of my college mates wanted to go. But after spending five hours in these walls with several hundred strangers who were digging these movies as I was, I quickly realized something. This was the scene I was looking for. I wanted in. Funnily enough, I now know several people who were at this screening, although we were years away from having known each other. The mind is tickled by the possibilities that I could've brushed past future friends while grabbing the next coffee between films. Still, those people are in my life now, one way or another, because of the film zine I published for twelve years.

I think Andre Breton, the founder of Surrealism, would've found much worth in the films of Ed Wood. A quote by Breton that I value greatly certainly figures into this experience: "One publishes to find comrades." That phrase I think also equally works for Wood's films. His work continues to speak to all of us outcasts who reject the conventional societal norms and attempt to build our own little worlds.

Free Screening! Tomorrow Night!
Stephen Broomer is back in Toronto to show his amazing experimental film, Potamkin, inspired the writings of 1930s film critic Harry Alan Potamkin. This is the thirteenth screening of the Ad Hoc collective, presented at Innis College, 2 Sussex Ave., Room 222, 7PM! Did I mention, it's free? Don't miss it!

Saturday! Independent Video Store Day!
In honour of the 8th Annual Independent Video Store Day, where video stores across the continent are celebrating the good old days when you used to discover movies at an actual location and interact with people, Eyesore Cinema is having a day-long event on Saturday October 20, with tons of movies for sale, plus grab bags and lots of fun. 1176 Bloor St. W. Facebook event link here for more information.

More next week! Till then...