Tales of an Analog Enthusiast, Volume One: REMEMBERING RONNIE

This is the first of an informal, irregular series of posts where I reminisce about the good old days of the video revolution. Now, some of you youngsters out there may be baffled by the term "video revolution", since when you were born, home video was already a commonplace thing. However, those of us slightly longer in the tooth (and I say only slightly), remember that there was a different world before the juggernaut of VHS provided a brand new way of seeing films.

Before the convenience of renting movies, in order to see films beyond first run, we had to rely on late night television (you know, when they still showed movies instead of those rotten infomercials). And people may forget just how much of a firestorm it really was when a consumer was suddenly given the flexibility to choose the programming in his or her own home. At first, home video was an expensive novelty, as one usually had to rent a VHS machine along with the movies (usually, one rented a VCR and two films for ten bucks a night, more for a whole weekend), but VHS machines gradually became more affordable. (Our first machine, way back in 1985, was a Quasar, retailing for $500... and in the days of Reaganomics, five hundred bucks was a lot more than it is now.) And of course, in another 15 years, VHS gave way to DVD, and now it has never been more affordable or easier to watch movies, via Netflix or On Demand, on top of the conventional experience of walking to the corner video store, and retail prices for new DVD's have plummeted considerably in the past three years. But in the land of VHS however, it took quite a few years before it became affordable for the average consumer to buy movies instead of renting them. (As late as 1989, I remember some singular VHS titles retailed for 100 bucks... now you can buy two or more DVD boxed sets for that.)

Therefore, when renting movies became such a craze, it wasn't long before a consumer could go to the corner store to rent a movie instead of relying on places like Jumbo Video, The Video Station, etc. And since this was a time when the retail price for a movie was still 80 to 100 dollars apiece, in order to avoid these overhead costs, a lot of convenience stores would have the services of a person with a large inventory of movies, who would travel the circuit (especially in small towns like mine), and stock convenience stores with a fraction of his inventory. Then every few weeks, titles would get rotated, and so stores would be replenished with a new batch of films after they presumably played out at that location. Then once a year or so, this person would also travel to big bad Toronto, swap with other people who travel circuits in other areas, and replenish their inventory with other titles. And in my hometown, Ron Botten was such a person.

Ron (or Ronnie) had his own store, Ronnie's Variety, which he stocked with his own films, and would also circulate titles with other stores around the county. (He also lived in a dwelling that was attached to the back of the store.) Now, before I continue, I should segue with this anecdote. Even as early as 1987, in my typically restless way, I was beginning to tire of a lot of the standard mainstream fare that predominated most of the stand-alone video stores. I was curious about and hungry for a lot of obscure trash that I could only read about vicariously in the columns of "Graffiti" magazine that my cousin John would buy, and which I would read when he cleaned at the hotel. At that time, this glossy Canadian publication (which focused on alternative music) had a regular section devoted to capsule reviews of trash cinema, all found on the shelves of a place called After Dark Video in some faraway land called Toronto. This was still a couple of years away before I would eventually move to the big city, and so for now, I had to quench my thirst for cinema obscura however offhandedly it happened. And so, one Friday in March of 1987, I found our hometown's version of After Dark.

Upon my very first visit to Ronnie's Variety, I walked out with the snoozefest Frankenstein's Castle of Freaks starring some character named Boris Lugosi, and the infamous Last House on the Left. How's that for an introduction? And these titles were just picks from a huge litter of great trash that people like me would covet. It seemed fitting to see these garish cereal-box-sized video cases aligning these dusty wooden shelves. Even at this point in the video revolution, these titles seemed out of place, out of time... yet were orphans rescued from the storm at Ronnie's. For the next few years, many Friday nights or Saturday afternoons were spent going through Ronnie's shelves, wondering what ragamuffin film to take home. To avoid any confusion, Ronnie stocked his shelves with mainstream, current releases too... and no-one gave you a better deal for renting the latest movies. One day, four movies, five bucks. Take that, Blockbuster. But it was the crop of obscure stuff that was more synonymous with the "Ronnie's" experience. But there is more... much more.

Going to Ronnie's Variety usually turned into an all-night or all-afternoon thing, where the ritualistic act of deciding on what misunderstood piece of celluloid to take home was usually followed by three hours of talking about cinema (and he sure knew his stuff), or listening to his stories. One could say that Ronnie's was the last bastion of "communal retail", like the corner barber shop, which was more than just a business, it was a meeting place. You sure as hell don't get this at Blockbuster.

And he was one hell of a host. This sandy-haired gentleman, with a creasy smile, ubiquitous cigarette in hand, was a true character. He would talk about being up till six in the morning watching movies until his wife told him to go to bed. That's Ronnie. One time he had a portable sign outside the store (where one would add the plastic letters): "Make her day- buy a rose. Make Ronnie's day- buy anything," That's Ronnie. One time I read in the paper that someone tried to hold the store up, and he managed to run to the back and call the police, causing the robber to flee. The newspaper story had one quote from the store owner- "At first I thought it was some kind of joke." That's Ronnie.

His good-natured, sardonic humour was just the perfect fit for an unusual place that had some of the most unique stuff you'd ever want to watch. These out-of-the-way films found their home in this out-of-the-way place... all as colourful as the man behind the counter. After I moved away to the city, I had since learned that Ronnie retired, sold the business to someone who ran it into the ground in less than a year, and the dwelling now serves a driver's education office. Part of me envisions Ronnie still spending his time sitting next to a crateful of films, listening to his beloved jazz station on the tinny little boombox that used to be in the store window. I doubt he'd remember me now, even though we were on a first-name basis (Okay, I was on a first name basis with almost every video retailer in my hometown), but I just would like to say, thanks for the education, Ronnie. You're the greatest. 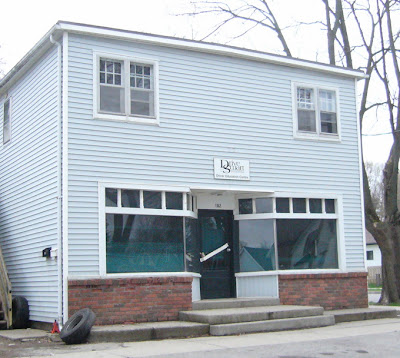 Formerly known as Ronnie's Variety
Photo taken by yours truly in April 2007.

Awesome story! I too was there for the creep into home video 'rentals', etc. (although home video recording, at least, and monochrome only, really started with Sony's home video reel-to-reel recorder in 1965, for the sum of $2000... a wopping amount of money in those days as you could buy a new car for that price).