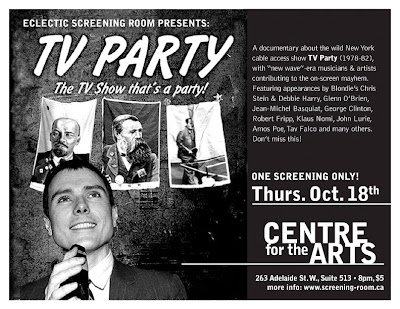 "TV Party" was a cable access show, running in New York, from 1978 to 1982, hosted by writer Glenn O'Brien, and was known for the punk-new wave musicians, as well as artists who were frequent guests, participating in the screen mayhem (Blondie's Chris Stein was often a co-host). The show also pushed the envelope in form and content, with irreverent onscreen antics, all while capturing the whole scruffy "Do It Yourself" aesthetic that permeated the music and underground film scenes in the Big Apple at the time. Seen today, its lo-fi technology may be otherworldly to those weaned on the antiseptic blandness of "Reality TV". Yet the rough nature of the show complimented the excitement of the era, and the temperature of the times.

I first encountered this phenomenon called "TV Party" last Boxing Day, in the semi-annual blowout sale at Vortex, I happened upon three singular DVD's, each with one episode of "TV Party". Upon scanning the synopses on the backs of the bus, it piqued my curiosity enough to grab these discs. It sounded weird, avant-garde and off-the-wall... definitely up my alley. (And also, curiously, it is during the winter that I specially hunger for avant-garde things more than any other during the year.) Well, based on the evidence of one singular episode of "TV Party", entitled "The Time and Makeup Show", I had ended up with more than I bargained for. This particular episode was so minimalist-- the camera drones along almost as atonally as the noise music that is played throughout the show, that it just seemed to take on a life all its own. (Think good Warhol.) So entranced was I with this video, that I put the show on repeat, letting it play all night, and continuing on when I woke up in the morning. It just became this organic kind of wallpaper that I would gaze upon continuously. Eventually, I discovered that Brink Films (who had been releasing the episodes) had also produced and released a documentary on the show.

Early in the spring, I made a deal with Brink to show this film, and yet I held onto it like a good wine, waiting for the right moment to uncork it for the unsuspecting Toronto public. I had taken a break from doing screenings after June, because of the difficulty in getting people out for the summer, and because I needed to recharge my batteries. But before I knew it, August turned into September and I realized that it was time to get back in action. And thus, after a long siesta, October 18 was our "comeback" screening, with this film.

Thankfully, this proved to be one of our most successful screenings to date, with a packed and receptive crowd, digging all the priceless clips of music and anarchy culled from the surviving U-Matic masters from the show, interspersed with interviews of such people as O'Brien, Stein and Debbie Harry. This was being shown in the usual digs-- the big studio of Centre for the Arts, which oddly gave a "you are there" feeling, as the show was set in a not dissimilar environment. (All we needed to do was pull the cameras from Studio B, and we could have done a show of our own.)

I am very grateful for the support, and thank all of those who helped make this evening a great success.