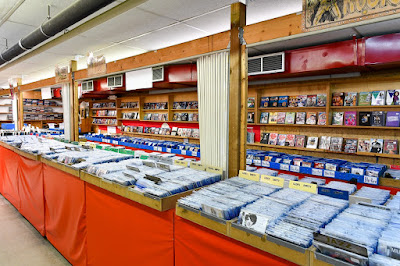 Welp. The 2022 Mount Unwatched project has, thus far, been underwhelming on several levels. JC Culp’s contributions have been few and far between (although I’ve added them to the site, still password-protected and not yet viewable to the public), and my own enthusiasm has waned, in part because I had picked some mediocre movies from the pile, and also because my neck injury in the spring had hampered my writing and enthusiasm. And then we were informed, on Father’s Day no less, that this house will be put up for sale in the fall, so now much of my time and energy is spent on packing, cleaning and looking for a place to live, after 25+ years here. A couple of weeks ago we did the first significant part of a huge cleanup: donating a pile of stuff (including boxes and boxes of books), and hurriedly boxing more stuff up to quickly put in storage. There is still stuff to sell or whatever, but it will be easier to decide what goes where once we know what the space of our new place will be like.

This is after all a blog about cinema, yet all of this of course affects the ability to view films and properly write about them. So, once things settle down after we find our new pad, I’ll look forward to revisiting this project in greater detail. For several reasons, the move is a blessing in disguise. For instance, it will be the life renewal we need - to revisit things we used to do and love that we’ve forgotten, and not just because of the pandemic. Where this project is concerned, I think it will also be a win-win situation, as I’ve had to learn to downsize, stop being a pack rat, and thereby be more appreciative of things.

And yet again, 2022 is shaping up to be another year of closure. This of course is a byproduct of getting older, as places and routines we become accustomed to fade over time.

Case in point. A couple of weekends ago, I had a rental car. By sheer coincidence I had learned at the same time that Don was retiring from his 37-year stint as the owner-proprietor of Dixie Records, at the Fantastic Flea Market, which operates every weekend in the basement of the Dixie Outlet Mall, and is selling everything at 50% off. For over ten years, whenever I had a rental car, I’d make a pit stop in Mississauga, and would always leave with a bag full of DVDs or CDs from Dixie Records. Upon learning of Don’s retirement (the shop’s last day will be July 31), I trucked out there that Sunday morning. (The last time I was there was also the last time I drove a car before the pandemic: January, 2020!)

I wanted this final “Dixie Records Pick” to be emblematic of what I used to go there for: good deals on DVD, and Canadian jazz CDs. If you think jazz is a hard sell, Canadian jazz is even worse! There is tons of Canadian jazz out there that just doesn’t sell: few have heard it, and its history is poorly documented. (I hope to contribute to leaving an internet fingerprint about it by beginning to review them on the revived Gee Whiz G-Man blog… another “Fall Renewal” project.) As a result, a lot of fine Canadian jazz music ends up being sold by Don for two or three bucks. Even at this remove, a lot of stuff had already been picked over, but I was satisfied with my haul. I bought some $1.00 jazz and blues CDs (actually 50 cents to me, as they were half off), and a few movies.

Although Don hadn’t seen me in 30 months, he remembered me, even with my mask on. At the end, we shook hands with a “thanks for everything over the years”. Another favourite pastime gone. Golden years, my foot.

This is a film blog after all, so what did I get at Dixie? Okay. These ranged from one to five dollars each. Girls Just Wanna Have Fun and From The Hip (ahem, because these were both Anchor Bay releases); Paramount John Wayne double-feature of The Sons of Katie Elder and The Shootist; double-feature of American Graffiti and More American Graffiti (is this the version with the digitized sunset? I hope not, but can’t complain at that price… stop pricking around with your movies, George); Jerry Goldsmith DVD (got this for Simon, who’s a big Goldsmith fan); Gus Van Sant’s first film Mala Noche (Criterion!); The Gary Cooper Collection (a five-movie set that was one of those Franchise Collections… I’ve seen similar ones for Rock Hudson, Marlon Brando, etc., this one was worth it alone for Beau Geste and The Lives of a Bengal Lancer, especially for that price).