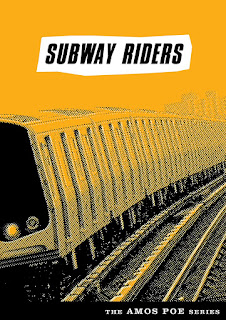 For the past several weeks, I've been on a "Downtown New York" kick, watching as many films as I can from New York's Lower East Side scene circa late 1970s to early 1990s (which included, but was not limited to, such movements as No Wave and The Cinema Of Transgression). This is timely because, of late, films by Amos Poe (a mover from this era who did cross over to comparatively mainstream success) have enjoyed a resurgence on disk. Vinegar Syndrome (via the subsidiary label, Fun City Editions) recently released Alphabet City to Blu-ray (review forthcoming). This month, MVD Visual has released three of his films to DVD as part of "The Amos Poe Series": The Foreigner, Unmade Beds, and Subway Riders.

As far as I knew, Subway Riders had previously not been available here in any home video format, so I was thrilled to acquire a copy. That feeling quickly evaporated upon tearing off the shrink wrap and dropping the disk into the player. It is one of the most piss-poor "mastering" efforts I've ever seen, making Cheezy Flicks look like Criterion. I could live with the fact that their print was murky and washed out, knowing how hard it is sometimes to find a pristine master of such a rare title. HOWEVER. Not only is the movie stretched to 16x9 from its original 4x3 source, it is also rendered unwatchable due to interlace problems throughout.

Come on, MVD. This is really lazy shit. I was so disgusted that I watched the movie on YouTube instead. The copy currently floating on there is much more watchable, even if it has non-removable German subtitles, with better colour and in its proper aspect ratio. If Poe's other two films are presented by MVD in the same piss-poor fashion, you're better off searching instead for those two titles on the now out-of-print releases by Eclectic DVD.

The DVD cover is posted above, so you know what to avoid. Definitely wanting a refund on this release.

Thanks for the review! I've been meaning to watch this flick for a while now. I too like films from that time and space.

By the way, you should be able to fix that aspect ratio malady by adjusting the format control on your television or disc player remote.

Even so, there's still the interlace problem throughout, which makes it unwatchable. That's Encoding 101. Come on, guys. Thanks for the comment!

Amos Poe lost the rights to all of his early films in a court case, so these are being released through the person who owns the rights, without his involvement.

Thanks for that input, Justin! Even so, no-one should have to plunk down their hard-earned dollars for such a piss-poor release. Save your money and watch it for free on Youtube instead.