(Well, after three weeks of battling the worse cold I've ever had, I'm finally back with enough faculties to complete the post that should have been added to this blog on or shortly after Wednesday August, 8.) 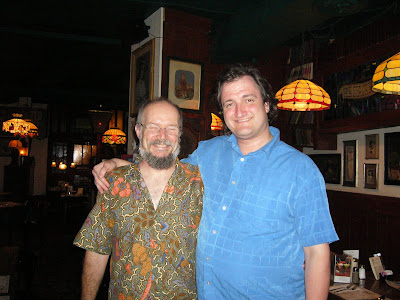 On the night of Wednesday the 8th, Susan and I were among those who were reunited with my dear old friend (and one of my mentors) Brad Puskas for a little soiree at The Old Spaghetti Factory. At the age of 21, I had made the daring, but insurmountably rewarding decision to return to high school and upgrade my Grade 13. Brad was then teaching theatre arts at school (I had not known him previously), and we became fast friends with our shared love of theatre and film. (At first, I couldn't remember his last name, and kept referring to him as "Mr. Pleznik", and the name stuck with some of us. But pretty soon, I didn't need to refer to him as Mr. Anything. We became close enough that "Brad" sufficed.)

For him and our mutual dear friend Scott Allgood (who taught English as well as Theatre Arts), I happily apply the title of "mentor". While I never had Brad as a professor, and although Scott had taught me in the first round of Grade 13, my association with these two outside of day classes, during that epochal year of 1988-89 had shaped much of the person I was through their guidance and encouragement... that person that I still attempt to recapture however weak-kneed nearly 20 years later.

Those crazy ten months to date remain the most overwhelming, trailblazing and rewarding moments of my professional life. In addition to taking a full day of classes, all while doing full-time shift work, I still somehow found time to be in two plays, and write and direct a feature-length video... all while forging friendships and blessing me with experiences that I will cherish to my grave. This monumental time of my life deserves a book in order for me to properly give credence to all of those magic moments, and some day I will write it-- it wouldn't matter if I was the only one who would read it.

And although Brad, Scott and I shared many hours elaborating on our love of theatre by putting together a play which managed to make it all the way to the semi-finals of the Sears Drama Festival, and also filled the corners with shop talk of our mutual love of cinema, another bond that I think is integral to this relationship is that we're all Sagittarians, whose birthdays all fall within the first two weeks, and thusly we all have that mad passion to march to our own drummers, and to reach for the stars despite any obstacle. (Plus, we share a certain sardonic humour.) In these pivotal ten months, my previously shiftless life was re-anointed with the possibility that I could do anything, and I damn near did.

In nearly 20 years, I doubt an hour of my waking life passes without some thought of those moments in time. Partially, I know much of this thinking as my trying to live back up to them. This incredible empire of creativity, fun and vitality had to end nearly as quickly as it had started. This core had fallen apart as people (like myself) had gone to the city to school, gotten jobs in the real world, or settled down. After subsequent attempts by myself to vainly try to re-capture the magic, I had finally taught myself to accept that the past had to be left alone.

In ensuing years, I had still kept in touch with Brad sporadically, as he became the art teacher, had divorced, re-married, had two kids and moved to Antigonish, and had lost his second wife to cancer. Thanks to that wonderful invention called Facebook, I had managed to re-establish contact with many of my old cohorts, and during the summer when he was visiting his family in Ontario, Brad had planned a makeshift reunion with students he had similarly befriended over the years. The irony lover in me would be remiss if I didn't at least mention that seeing him in person again after all these years couldn't have come at a more opportune time.

Early in the week, I had become more aware than ever of the disarray I commonly refer to as my life. Perhaps I was undergoing more self-awareness because of the upcoming reunion, but my self-realization increases with inverse proportion as the days decrease towards "mid-life crisis" time. If the Greg Woods of 1989 saw me pissing away my time with what commonly fills my days, he would probably kick my ass, and I wouldn't blame him.

As I creak toward the mountain peak this year, these days have paused for a lot of reflection, helped also in no small measure by Facebook. Even though it seems just like yesterday when I was a precocious student who still had promise, it's incredible how much has changed while other things remain the same. People whom I thought would never get laid in their entire life are now settled down with a couple of kids. Meanwhile at the bat cave, it seems I've spent the past eighteen years simply spinning my wheels in the muck. Early on, I made a lot of sacrifices to instead pursue an elusive dream, idling away my time on unfinished projects and creating one mess after another. Now, I'm not turning this into an exercise of self-pity, as I realize I'm luckier than most people, not least because I have been fortunate to be with that special someone for a dozen years now, when many people I know still have no one to come home to. Essentially, this crescendo of self-reflection has just made me realize to stop fucking around and get on with things, decide what of these half-finished dreams I still want to complete, and be more aggressive about changing the things in my life that need it.

Crescendos are coupled with diminuendos, and as such, chaos is followed by calm. That Wednesday night, it was not hard for the Greg Woods of 2007 to re-discover that Zen calm I always got from Mr. Pleznik. I am reminded of the times in Allgood's class poring over "Film Comment" and saying "Why don't we do this? Why don't we do that?" , or philosophizing over cider in Mr. Pleznik's living room as "Great Gig in the Sky" idled on in the background. Although it took me a moment to locate him in the restaurant as he was without his trademark ponytail, and despite that his life (like many, I'm sure) has had many hardships in these eighteen years, here he was... the same old Brad, with his trademark sardonic wit, sense of fun, and constant evolving (as he talked of his own short-term aspirations).

As such, one cannot help but have a bit of his aura rub off on those around him. One of the final remarks made in the evening was "I was sure Greg would be the first to produce films". This was not meant as a put-down, just a matter of fact. But this statement spoke more to more than he may have thought, as in the past few years i've been less enthusiastic about producing my own work (especially since so much of my time is devoted to upholding other people's). But more to the point, this reunion with my old friend was an indirect reminder for me to stop spinning my wheels, and confront myself with hard questions about what I am truly passionate about. And who knows? Maybe I just might find a bit of that magic from 1989 in the process.