I Found Drive-In for a buck ninety-nine... (or, One's Bittersweet Victories as We Lose Yet Another Cultural Icon)

On June 30, Canada's institution, Sam the Record Man, closed its flagship store in downtown Toronto. The announcement of its closure was met with sorrow, yet likely not with much surprise, as the franchise truly never recovered from going bankrupt in 2001, which prompted Sam's to close all but a handful of stores across Canada. In the ensuing years, its main store on Yonge St. seldom had the customer traffic it used to have even ten short years ago. There's a multitude of reasons why this landmark closed -downloads being one of the culprits- and surely you will find more appropriate pieces than this one to explain just how much Sam's shaped our record industry, with its promotion of Canadian artists, and the great finds one would always have among its dusty shelves. (Even though they received competition from HMV or Sunrise Records within the one-block radius, rounding out what I called "The Unholy Three", Sam's still got my money 90% of the time, for price and selection).

Slowly, over the final few weeks, their inventory dwindled, as any merchandise they couldn't return would only fit the first floor of the three-floor building. And then in the last couple of weeks, suddenly, in the two big rooms on the first floor, were rows upon rows of VHS tapes! These hundreds, perhaps thousands, of titles all harkened from when Sam's video department (Sam The Video Man) used to rent movies. I had thought they sold off these tapes years ago, yet to the delight of myself and untold amounts of collectors, here they were up for grabs at $1.99 a pop. 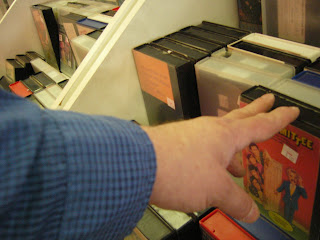 It is said that VHS is dead. Yet one would be reminded of the contrary upon viewing the fervor in which these colourful eccentrics (myself included) were filling up their shopping baskets with these dusty hardshell cases. Yet, one could ask, what were they buying? What were they holding on to? In other words, are these consumers acquiring more than just old movies on a dated format? Or are these grandiose souvenirs?

This city becomes even more gentrified like any other metropolis, with its unique landmarks being replaced by brand names (I shudder to think of Sam's turning into a Starbucks, or some other corporate regime, but expect it will). It doesn't matter if its Haight Ashbury, 42nd Street, or even Yorkville... seeing distinctive cornerstones of pop culture being plowed over in favour of The Gap or condos for Yuppie scum is to also witness a part of our personal history and identity disappearing. Do you think people will lament when a Walmart closes? Sure, you may say that Sam's was a corporation too, but it spoke to people. It wasn't about social cliquism or cultural snobbery. It tapped into our collective pop culture... it was about sharing, and discovery.

Thus, it is somewhat fitting that in the twilight days of Sam's, I got that feeling of discovery one last time... and how. While no doubt a lot of bargain hunters or record connoisseurs went looking for obscure albums for bargain basement prices, my time spent was at the racks hawking these old VHS tapes. 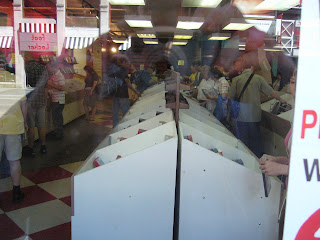 So if you, dear reader, are asking The Burning Question: "Gee, how many VHS movies did you get?", the answer will not be supplied here. Nor will I divulge how many times I kept going back to, um, help clean out their inventory. Instead, to extrapolate on my point above, that of the titles I amassed, as far as I know, 71.5% have NOT been released on DVD.

After my first visit to the racks, I left with Monte Hellman's Flight to Fury, Robert Altman's Brewster McCloud, and... be still my heart.... Drive-In, the much worhsipped 1976 cult comedy. Now officially crowning myself king of the geeks with that score, I revisited the shelves to acquire such gems as Billy the Kid Vs. Dracula (sigh), Hillbillys in a Haunted House, the biker epic J.C., the early 60s independent film Strangers in the City, the hippie-dippie epic Thumb Tripping (which I've been seeking for 20 years), skads of indie titles from Facets, and many more that still haven't been transferred over to DVD. Who can say if some of these ever will? With the way companies merge and no-one can tell who owns what anymore, and how DVD releases always get halted due to music rights, it's no wonder VHS has been collectible now just the way vinyl was when it became clear that not everything was out on CD.

Coming away with all of these discoveries was a joyous event that any collector could understand, yet one must also pause for the circumstances under which we obtain such gems. In other words we're digging out of the mountain before it collapses, and sadly, it is at the end of an era where people like myself find some treasures like this. Yet, should the milestone of Sam's end any other way? Foraging through all of this stuff is to be reminded of what it meant to shop at Sam the Record Man all along: "Hey, look what I found!"

Thanks for the memories, Sam. 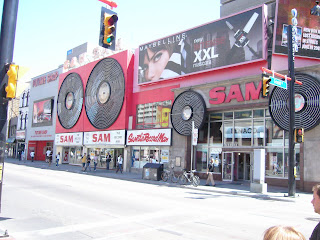 Nothing much to add, you nailed it. Sam was a special place and I too preferred it to the competition the vast majority of the time.